Researchers at the Michigan DNR fisheries station in Mt. Clemens wanted to determine how many lake sturgeons lived in the St. Clair River and Lake St. Clair.

“We had no idea how to count them,” said Mike Thomas, one of the lead researchers on the MDNR’s St. Clair River lake sturgeon assessment project.

Traditional fish sampling methods such as electroshocking or netting would not work in the river’s strong current. So, the researchers turned to commercial fishermen who, at that time, were still allowed to take lake sturgeon from Lake St Clair.

“Gobies were a big breakthrough for us,” Thomas said. The small fish proved to be an excellent lure and the invasive species did not require a pile of paperwork to be used as bait.

After tagging and releasing fish for several years, researchers begin to recapture (or recap as they say) fish that are already tagged. Each season a higher percentage of fish will be captured with existing tags. Researchers use recapture data to estimate populations, or rather computers do.

Thomas said the recap point is not a specific number but rather a refinement of range. For example, in the fifth year, they might recapture enough fish that the computer estimates the population at 8,000 – 20,000 fish.

But, the next year’s data might refine the range to 10,000 – 16,000 fish which is better, but it’s still a difference of 6,000 fish. So, the researcher kept going back out year after year, setting lines and tagging fish. Using this method, the longer the researchers survey the more exact the population estimates become.

The Michigan DNR’s assessment of the lower St. Clair River put the population of spawning lake sturgeon at roughly 12,000 adults.

The Hunt for Caviar

Once the MDNR had confirmed that a large population of lake sturgeon were using the lower St Clair River for spawning, their next goal was to locate the exact spawning sites, if possible.

The most accurate way to determine where sturgeon spawn is to find fertilized eggs on the river bottom. Since the St. Clair River was 20 to 30 feet deep at the potential spawning sites, someone was going to need to go diving. The first person the researchers called was Greg Lashbrook.

Greg Lashbrook is a nationally accredited underwater cameraman who specializes in freshwater. When the DNR asked Greg if he could check a couple of sites for sturgeon eggs, he was sure. Just before Greg jumped in the river, he said he just had one question,

Check out this timeline showing the stages of a lake sturgeon’s development from EGGS to ADULTS.

4 thoughts on “How do you count sturgeon?” 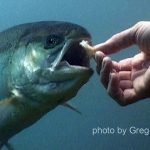